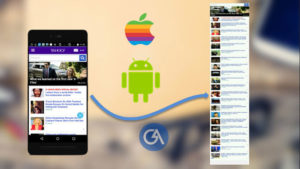 But no need to worry anymore because there are lots of third-party apps which will help you to capture a long webpage or long chat conversation in a single screenshot.

How to Take Scrolling Screenshots in Android and iOS

A scrolling screenshot is the one that captures what various screenshots would cover but in one image. So read below about the top 2 apps that will help you to Take Scrolling Screenshots. 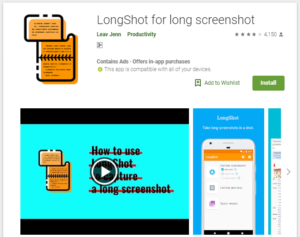 LongShot is a powerful app for Android mobiles that takes long screenshots of conversations, web pages, threads, etc. It has the following features:

Here is how you use and take screenshots in LongShot:

Step 2: Now open the app and click on the CAPTURE SCREENSHOT button. Check the Auto-scroll checkbox.

Step 3: A pop-up will appear, click on START NOW.

Step 4: Now go to the screen where you wish to capture the multiple screenshots and click on the Start button and slowly scroll.

Step 5: Click the area above the red link to stop capturing.

That’s it. It will combine all the images in a single screenshot.

If you want to capture the screenshot from any web page, then :

Step 2: Now enter the URL of the website from which you want to capture the screenshots.

Step 3: Scroll down to the entire page from starting till the end and click on End here and capture.

That’s it. It will capture the entire web page into one single screenshot.

#3. Select Images and Stitch Them Together

Step 2: Now select the images which you want to join your gallery.

That’s it. Your images will be merged into one single image. 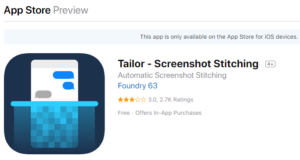 Tailor is also a very nice and versatile app for iOS mobiles. It works with WhatsApp, Facebook Messenger, Twitter, etc.

You need to do nothing except capturing the screenshots that you want to combine manually and add them into the Tailor. The app can automatically stitch them together.

The basic version of Tailor is free, but it contains watermarks and ads. For a $3 in-app purchase, you can remove the ads and watermark from it.

So guys try out the app which we have mentioned above to capture long screenshots on iOS and Android devices. Taking these kinds of screenshots will definitely save your time and bandwidth. In case of any queries, please reach out to us and do comment in the below section. We will try to answer your questions asap.

Why are lab-grown diamonds valued less than natural diamonds?

How To Start Preparing for the 2023 Tax Season