When looking for the best VPN, privacy and security are top concerns, and iTop VPN’s goal is to keep you secure online. This new VPN provider, unlike many security focus VPN services, doesn’t make any compromises in terms of everyday usage, and it provides a free VPN plan to make its VPN service competitive.

With apps for a wide range of devices and a decent distribution of over 1,800 servers across 100 countries, iTop VPN is quick and suited for just about every user. Its superb streaming performance also means it’s not just for privacy freaks.

In this iTop VPN review, we’ll explore the provider’s inner workings to see what it can actually deliver and whether it’s the best VPN for you.

iTop VPN is one of the most appealing free alternatives we’ve encountered from any VPN providers. You can have an ad-free VPN service with no data logging for absolutely no cost. The main drawback is that you can only select from servers in six nations.

To protect your online privacy, iTop VPN is a no-log VPN that doesn’t record any of the traffic that flows through its servers. Your internet traffic is hidden from your internet service provider when you connect to a VPN server, but the VPN provider can still see the traffic. It is essential to use a no-log VPN for this reason.

Your connection is initially routed through many of iTop VPN’s most secure servers when you use the service to connect to a server. As a result, network attackers will never learn your real IP address or browsing history, even if you visit a website that is compromised with malware.

In case your connection drops, iTop VPN additionally provides a built-in kill switch to protect your IP. While iTop VPN can be configured to automatically open a connection when your computer turns on, there is no option to have the VPN turn on when you join a public Wi-Fi network.

Although iTop VPN’s superb privacy and security are its key selling points, that doesn’t mean the service is weak in other areas since it has some fantastic unblocking features.

In our tests, it was able to unblock websites including Disney Plus, Hulu, Amazon Prime Video, and US Netflix. This is a feature that few other providers can match, and iTop VPN’s performance earned them a spot as the top streaming VPN.

However, there is a slight catch. It’s worth noting that the Free plans don’t provide this level of unblocking capability, even though it’s likely that most users will choose the expensive plan since it offers this streaming performance. 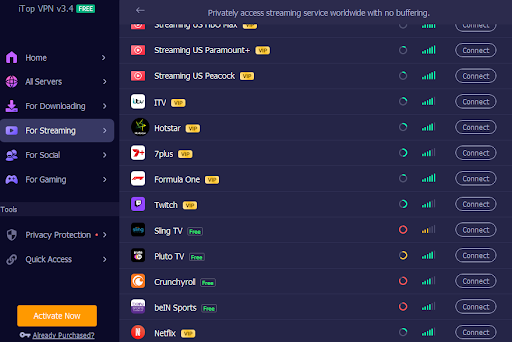 A decent quantity of information is provided to you about the servers themselves as well. It’s useful to observe load since you can tell which servers are best for streaming, P2P, and gaming.

In settings, you can modify options like the kill switch, split tunneling, configuring Quick Access, and DNS protection. For us, everything went without a hitch, and no settings stuck or wouldn’t change.

By the way, the kill switch really does work. Whatever we tried to do to confuse it, it always operated as expected and didn’t reveal our real IP.

iTop VPN nearly does everything and it does it well. It provides excellent speeds, has industry-leading privacy and security features, shines at unblocking streaming websites, and even includes a great free data package. Even though the apps aren’t as neat as those of well-known competitors, iTop VPN should still be on your shortlist.

What Is a Board of Directors Portal?

Differences Between Offline and Online Casinos

What Is Performance Marketing? A Comprehensive Guide