To put things into perspective: the top TikTok influencers can pull in millions of dollars each year from sponsored posts. That’s a lot of money from some short videos. Plus, they’re known to be a tremendous growth-mechanism for businesses looking to scale.

So, who are the TikTokers running the scene? And how’d they get there?

We’ll answer both those questions in this guide to the 8 most successful TikTokers. Read on to find out some tips you can use to climb the TikTok ladder.

About: Charli D’Amelio is a 17-year old TikToker who was born in Norwalk, Connecticut.

How They Made It: Charli had been a competitive dancer for a full decade before she made her debut on the popular social media app, and the skills she acquired over the years helped catapult her to TikTok stardom.

Typical Likes Per Video: Her videos typically get over 1 million likes within a day of posting.

Net Worth: Estimated at $8 million

Curious to see how much it would be to work with a certain influencer? Try this tiktok money calculator.

About: Addison Rae is a 20-year-old TikTok celebrity born in Lafayette, Louisiana.

How They Made It: She rose to fame by uploading videos of herself set to songs that were trending on TikTok.

Typical Likes Per Video: Within the first day of posting, her videos typically get over 1 million likes.

Net Worth: Estimated at $2 million 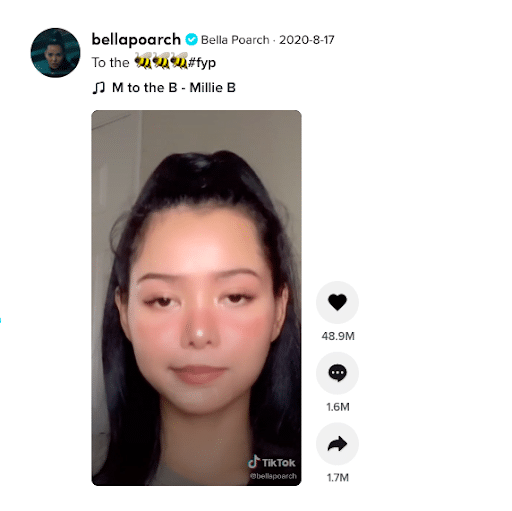 About: Bella Poarch is a 24-year-old TikToker who was born in the Philippines. She’s known for her lip-syncing videos and is a U.S. Navy veteran.

How They Made It: Bella Poarch became famous by making lip-syncing videos using the Face Zoom effect on TikTok.

Techniques Used: The Face Zoom effect is a big part of Bella’s brand and recognition. She also uses popular songs in her videos.

About: Zach King is a 31-year-old social media star. His videos typically employ illusions, which he refers to as digital sleights of hand.

How They Made It: Originally, Zach King was posting his videos on YouTube and Vine, starting as early as 2008. When TikTok started to catch on, he began posting there, and gained a following for his unique and eye-catching illusions.

Typical Likes Per Video: Zach’s videos typically have around 500,000 likes, but some have many more, reaching over a million.

Net Worth: Estimated at $3 million

About: Spencer X is a 28-year-old TikTok celebrity, musical artist, and beatboxer.

How They Made It: Spencer X rose to TikTok fame thanks to his beatboxing skills, which allow him to make a variety of hard-to-produce musical sounds using only his mouth.

Net Worth: Estimated at $1.2 million

About: Loren Gray is a 19-year-old TikTok celebrity from Pottstown, Pennsylvania. She’s a model and singer and was previously signed to Virgin Records, although she’s now an independent artist.

How They Made It: Loren Gray originally became popular not through TikTok, but through musical.ly, TikTok’s now-defunct spiritual predecessor. Eventually, her music career began to take off, and she continued her rise to fame with the help of TikTok.

Net Worth: Estimated at $2.4 million 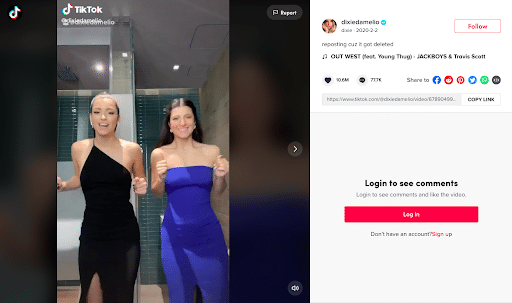 About: Dixie D’Amelio is a 19-year-old TikTok celebrity and the older sister of Charli D’Amelio, who we covered earlier in this article.

How They Made It: Dixie D’Amelio began posting on TikTok after her sister, Charli, had already started to become popular. The fact that her sister was already a popular TikToker no doubt helped her secure an audience.

Net Worth: Estimated at $2.9 million

About: Will Smith is a 52-year-old American actor born in Philadelphia, Pennsylvania. He has appeared in numerous films, such as I Am Legend, and was the star of The Fresh Prince of Bel Air.

How They Made It: Will Smith didn’t rise to fame through TikTok — he was a cultural icon before the internet was even commonly used. Instead, he became famous through his television and film appearances and eventually used TikTok to engage with new audiences and continue to engage with his current fans.

Techniques Used: Will Smith’s TikToks aren’t known for any specific techniques. Instead, he uses an eclectic mix of clever editing, popular songs, trending hashtags, and simple star power to keep his audience watching.

Typical Likes Per Video: Will Smith’s videos typically get between 300,000 and 2 million views.

Net Worth: Estimated at $350 million

While there isn’t a one-size-fits-all formula that you can apply to guarantee your own path to TikTok fame, there are some things that all the most popular TikToker’s share.

On the most basic level, the top TikTokers all have content that’s intriguing for one reason or another. In the case of some influencers, that’s their dancing abilities, while in others, it’s their musical talents or video editing skills. It doesn’t really matter what your hook is, but you need to have one.

Next, all of the top influencers retain a certain level of personability. None of the TikTokers on this list, even A-list celebrities, like Will Smith, come across like distant celebrities. Instead, their videos often show themselves in fairly normal situations, like sitting in their cars, in their kitchens, etc. There’s a certain feeling that when you watch their TikToks, you’re sharing an intimate moment or viewing a video your friend just sent you.

Additionally, all the TikTokers at the top have a consistent and recognizable style. While they’re not always totally unique (some of the top TikTokers have similar styles), they are consistent. That means that fans will always have a pretty good idea of what they’re going to see before from the influencer’s feed.

So, what does this all mean for you as an aspiring TikTok influencer? The best thing you can do is get out there and start posting. Your own unique style will develop over time as you get used to posting on the platform and figure out what works, and what doesn’t.

You don’t need to come across like a celebrity to become a celebrity. Just get out there, have fun, stay personable, stay consistent, make good content, and there’s a good chance that followers will come naturally.

The Importance of Email Warm-up Service

Do I need to buy TikTok shares?