Draw Over Other Apps Solution: When you install an Application from Play store on your Android phone, sometimes, it gives a warning message to the user. This message says ‘screen overlay detected setting‘ and then you get frustrated to solve the problem. It covers your screen and you can’t go back to home screen or anywhere else on the mobile phone. 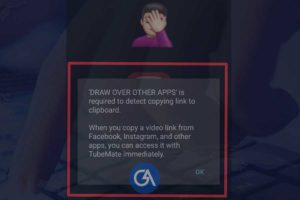 Actually, ‘draw’ is a feature of Android phones that allows Android apps to run over other apps and it works continuously. For example, Facebook Messenger, TubeMate, Facebook Video, and many more apps are behaving in the same manner.

Don’t worry! as we say always you don’t need to worry about anything related to tech. We are here from GeekyArea to help you with the same issue.

If you want to keep your passwords safe and secure, you can try our top 10+ passwords manager apps for Android.

What is Screen Overlay Detection Setting?

Here is the official definition of ‘Screen Overlay Detected’-

When we install a new app on Android mobile, it says-

“To change this permission setting, you first have to turn off the screen overlay from Settings > Apps.”

When I saw this error first time on my mobile, I got frustrated and I tried to fix the issue. After doing a lot of efforts, it was the same and I was irritating a lot. Then, one friend from GeekyArea team helped me in this case.

The solution for ‘Screen Overlay Detected’ Problem on Android

We are sharing various methods for the same problem because having different modules and securities on all phones. Let see which works for you.

Here, we are mentioning the two methods: For Samsung users & Non-Samsung phone users.

If you want to have some fun with your Android phone, you can try this amazing trick ‘change IMEI number on Android device‘.

#B For Samsung Users – Turn OFF Screen Overlay

As you know each app needs separate permission to run on your Android device and if you allow, it runs otherwise it doesn’t run properly. Nowadays, 90% of apps need photos and media permission, location permission, camera permission and we need to allow them to use the apps in a good manner. 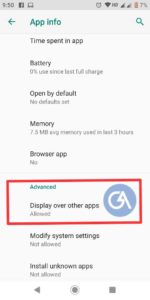 Please have a look at below screenshot: 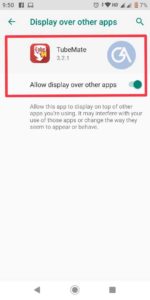 To check this permission, you can go to the main setting of the device and then move to the application manager. Here you have all the apps you installed on your phone. Kindly check all apps by the permission section.

#3 Re-Try the Same App and Turn OFF Screen Overlay

Sometimes, an app gives the same error only one time and when you remove the app from task manager (not from the device) and then open the same app, it works fine. It happens because of some apps checks the permission and environment to run for the first time only. So you can try this method also to remove ‘screen overlay detected’ problem.

Wrapping the Article on Screen Overlay Detected Setting on Android

All these 3 methods are working on various Android mobile phones for screen overlay detected setting and you can find apps that draw over other apps easily. Again, if you get any problem or query, just drop a comment below and we will try to fix that as soon as possible.

Akhand Pratap Singh is a 21 yr old tech geek based on Lucknow and studying in BCA 5th Semester. He is writing on various topics like Android hacks, offers & deals, tricks, and social media tips.

11 Command Prompt Tricks and Hacks You should Know

How to Use a Keyboard and a Mouse on PS4, and Which Games are Compatible